Funders faster to reply to applications

Federal government agencies have made the biggest strides in reducing the time it takes to make a decision about grant applications, as grantmakers overall show a promising downward trend with wait times, figures from the AIGM’s grants distribution platform SmartyGrants show.

Despite the positive progress, federal, state and territory governments continue to take longer than other grant providers to determine grant applications, with many keeping grantseekers waiting more than two months for an assessment.

The grantmakers quickest to respond to applications include QANGOs such as statutory authorities, followed by business and corporate funders, philanthropic groups, and finally local governments. 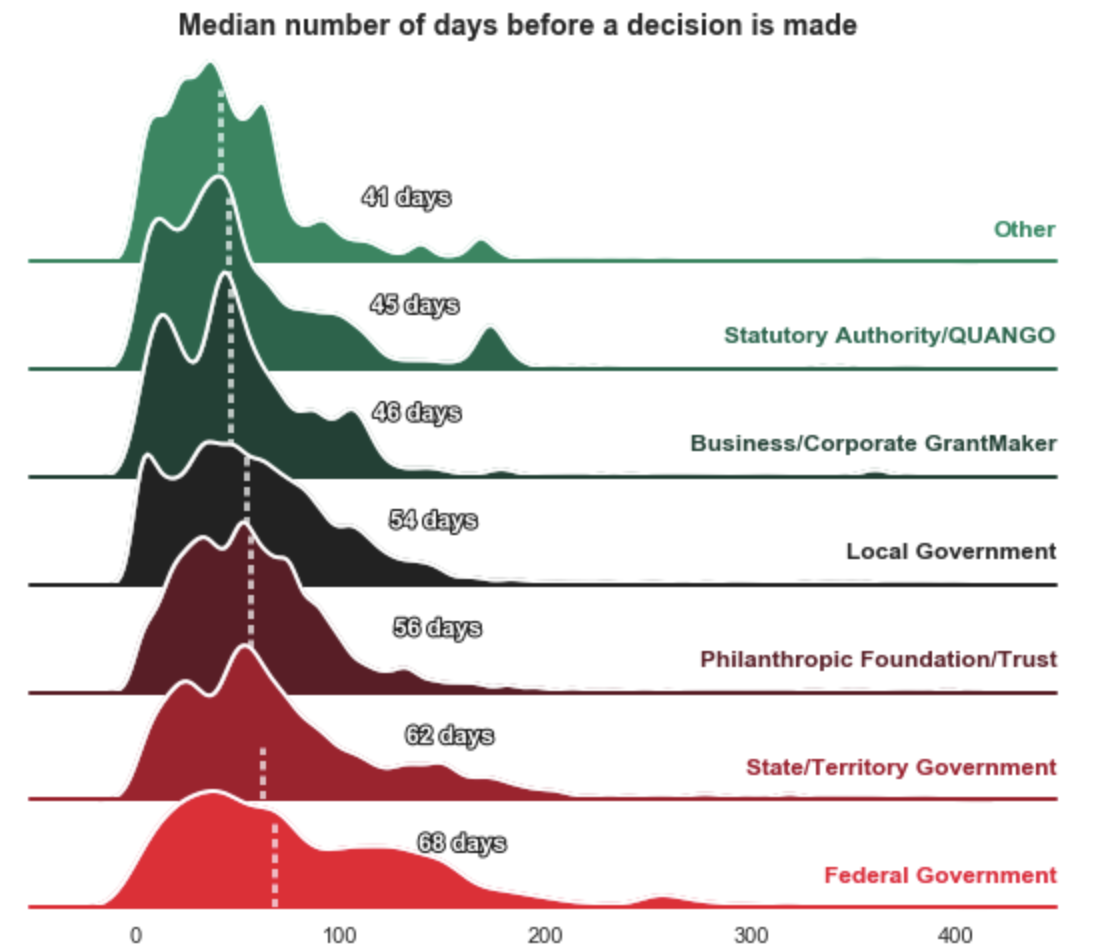 Our distribution graph shows the level of variation in decision-making by funders.

Analysis of SmartyGrants data by Our Community Innovation Lab data scientist Joost van der Linden shows federal agencies have significantly improved wait times in the past five years from a median of more than 100 days to 68 days in 2018.

At the same time, median wait times for all grantseekers have fallen from more than two months in 2013 to just over 50 days in 2018.

“While there are clearly some grantmakers who buck the trend, when taken together, we can see that overall grantmakers are cutting down the waiting time for grant applicants,” Mr van der Linden said.

He said local government grantmakers were the most consistent improvers.

“A clear but modest improvement can be observed for local government grantmakers, with the median assessment time reducing from 65 days in 2013 to 49 days in 2018.” 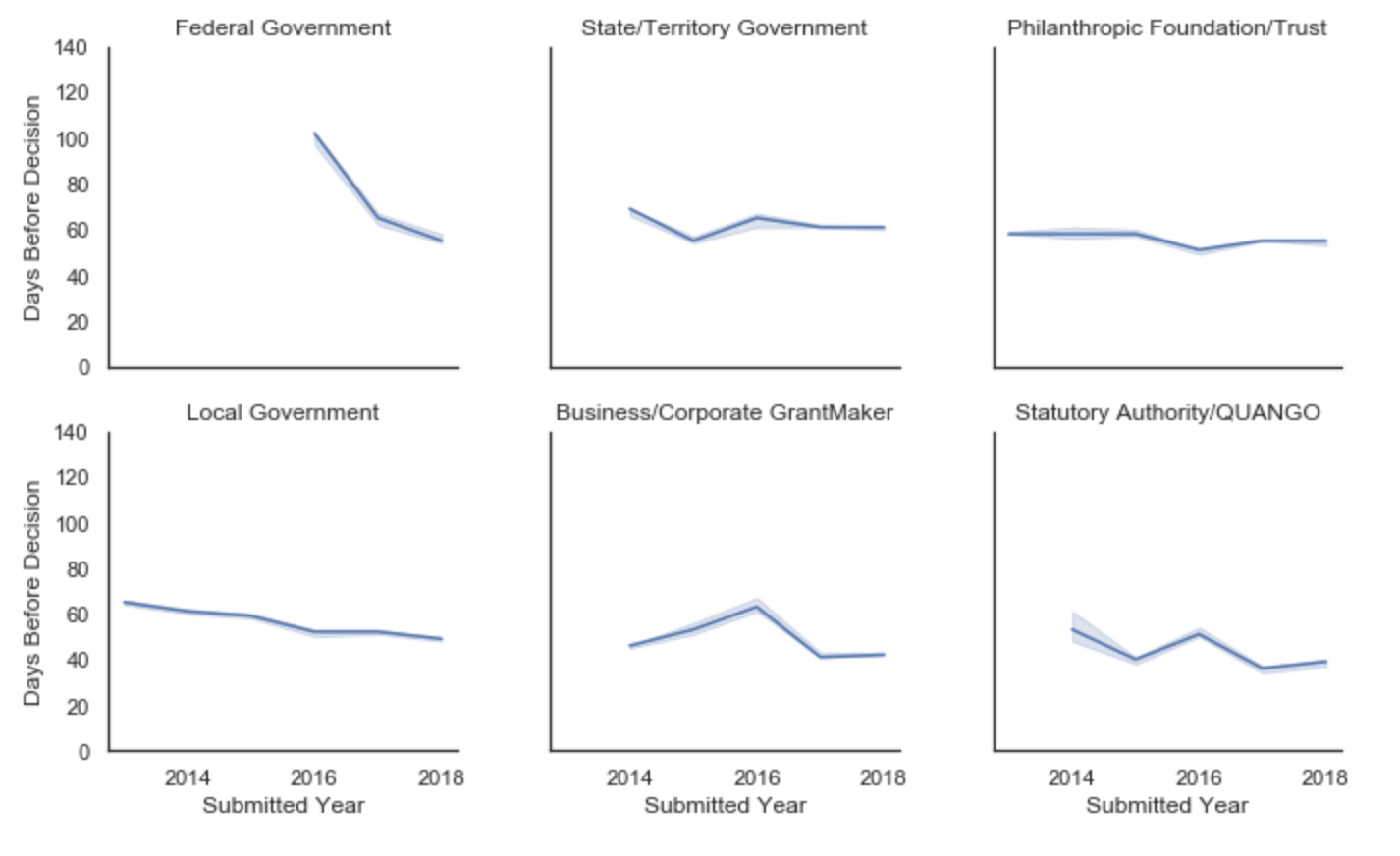 Big variations in the overall trends

The data shows big variations within and across sectors. For example, while the median wait for state and territory governments was 62 days, the distribution graph shows there were plenty of applications assessed within 50 days.

The distribution graph also shows organisation types can have two or more peaks when it comes to decision times.

There are also some outlier organisations with much longer wait times than the average in their sectors.

Our figures show that federal agencies and local governments have been consistent improvers, while other grantmaking types display a somewhat stagnant or variable trend. 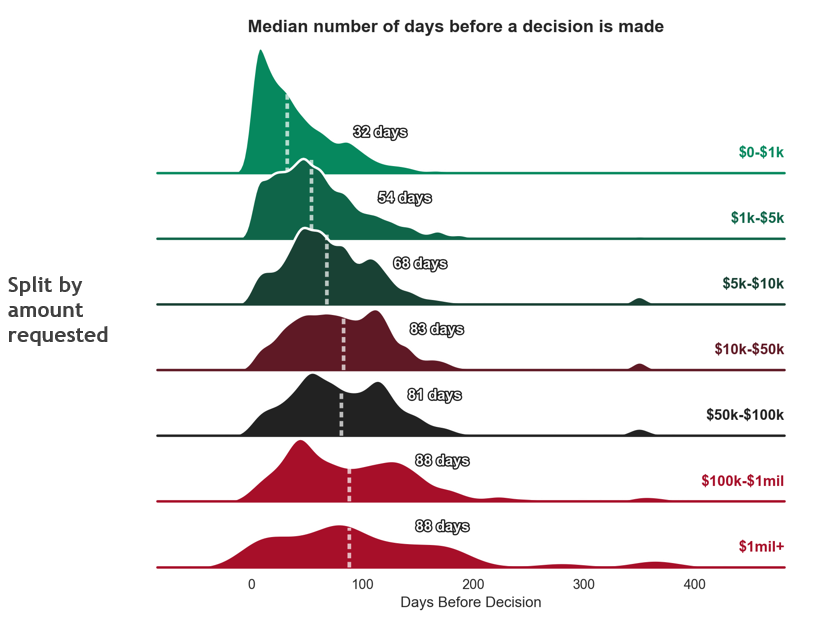 Smaller grants are assessed quickly, while decision times for grants worth more than $1000 increase dramatically, before levelling out past $10,000.

What’s the connection between grants value and delays?

Not surprisingly, there’s a strong correlation between the grant amount offered and the time taken to consider the application.

Applications for amounts of less than $1000 are the most likely to be decided within 30 days.

Significantly, many organisations take three months or more to decide on grants valued at less than $1000, which begs the question: Why are grantmakers taking so long for such small amounts?

For grants of more than $1000, applicants can expect to wait longer, with the median timeframe rising to 83 days once applications breach the $10,000 mark.

However, the wait times don’t extend greatly past that point, with the margin between a grant of $10k-$50k (81 days) and a grant of $1m+ grant (88 days) just a single additional week of waiting on average.

We are, of course, talking about the median figures here, and once again, there is significant variation in decision times, across all grants-value ranges.

In this article, we’ve drawn on SmartyGrants statistics to compare program types, and we urge you to review these figures in conjunction with our Grants in Australia series, a detailed examination of grantseeker behavior and attitudes. The latest report issued was in August 2018.

In the latest edition we examine the strengths and weaknesses of AI-assisted grants and many more ways to do better.

What makes a good grantmaker?

What can you learn from the 2019 Grantmaker of the Year winners?

Grant partnerships will avoid the pain

Port Phillip Community Group executive officer Karen Sait has sat on both sides of the table when it comes to grants, so she understands what it takes for funders to make things easier for recipients. The simple answer? Good partnerships.

Not evaluating your grants? It'll cost you

The Ian Potter Foundation is building a strong reputation for its laser-like focus on evaluation and its benefits, and leading the charge is Dr Squirrel Main.